my father unpacks his suitcase that
is still shedding sudanese dust around the
handles and hands me a hijab that my
cousin’s tender fingers picked herself
from a thousand ways to say i love you
to a face you haven’t seen in a sorrowful
decade/ the scent of bakhour hovers in
the threads/ rests in the graceful seams.

i stare at it often/ watch it carefully
afraid it might run away/ like my arabic did
that it might dissolve / that I might see the
incense pack up & leave the soft cloth
turn it dull & lose its magic/ like me
when i left sudan for the last time &
never returned, an imposter with
a missing grandfather’s last name.

baba shows me photos of him & his
brothers of the house before its color was
captured by a camera/ he tells me stories
about the making of a nation
about the way they gently formed their own
stories/ holding something fragile and infant
& taught its name to their children & their
neighbors/ he laughs about the national
youth movement & the letters he wrote to
the head of religious affairs who was
his own father/ about the thousand couple
weddings they threw under the pulsing
summer sun, when people were young & in
love & poor/ about how they celebrated
themselves and called it freedom how
colonization breaks supernatural things
into ordinariness, imagination stripped away
like the peel of a potato/ like the skin of the
lamb we sacrificed in the front yard
on eid morning that bewildering year.

my friend changes her facebook profile
picture with a translucent rendering of
the sudanese flag someone reposts a video
of the palace on fire/ a thousand women
marching, toubs bright white, chanting
the name of a tyrant they want to disappear
my dad grins, tells me that my uncle has too,
taken to the streets & my other uncle has not
& still there is a baby on the way & a
funeral has still only just passed &
my aunt is still calling him over for dinner.

i simmer in the thought of distance, the span
of space & what it does to a daughter/ how it
leaves you struggling to pronounce the word
family in their own language leaves you
watching revolution from the sidelines,
biting your tongue until it fills your mouth
with salty, bloody shame, cursing your
own muteness & wishing you were whole
enough to apologize without calling on the
letters of an oppressor to say that i would
offer my heart for the bank of the nile
sell everything just to kiss my aunt’s
blessed forehead. here i am/

holding on to so little to claim that beautiful,
hallowed name but this radiant slice of mother
Africa my cousin’s hands carved from her
breast & turned into sacred textile. 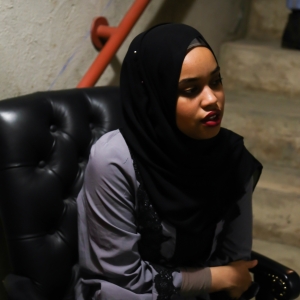